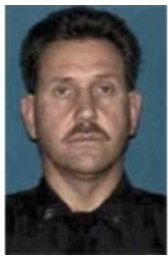 Brian Ahearn, 43, of Huntington, was a lieutenant at Firehouse 230 in Brooklyn. He was last seen in the lobby of the south tower.Ahearn “became a perfect American citizen,” said his mother, June Ahearn of Palm Bay, Fla.

But he didn’t start out that way.

“I don’t know if I should say this, but when he was younger he was a rip out of hell,” she said.

There was the time when he was 3 years old that he sawed the leg off the family’s couch. As a teenager he hung out with “dumb kids,” despite his 140 IQ, his mother said.

But that all changed, she said, when he followed in his father Edward’s footsteps and became a firefighter, married and had two children, Lauren and Christopher.

He loved baseball, played with the fire department, and took good care of himself physically.

“As a man he was almost perfect,” she said.

Both of his children, 9 and 5 at his death, are honor students and his wife, Debracq, still close to her in-laws, is engaged. But the toll on all of them was a heavy one, June Ahearn said. “It’s something that never leaves you. You want it to, but it doesn’t.”

The parents, who had lost another son two decades earlier, said they “talk to them both everyday, no matter what happens.”

And she said she finds herself peering into the faces of men who would be her son’s age. “I study their faces. I wonder if what is happening to their faces, would have begun happening to him. He’s in a better place. I’m sure they all are.” – Ridgely Ochs

We use cookies on our website to give you the most relevant experience by remembering your preferences and repeat visits. By clicking “Accept All”, you consent to the use of ALL the cookies. However, you may visit "Cookie Settings" to provide a controlled consent.
Cookie SettingsAccept All
Manage consent

This website uses cookies to improve your experience while you navigate through the website. Out of these, the cookies that are categorized as necessary are stored on your browser as they are essential for the working of basic functionalities of the website. We also use third-party cookies that help us analyze and understand how you use this website. These cookies will be stored in your browser only with your consent. You also have the option to opt-out of these cookies. But opting out of some of these cookies may affect your browsing experience.
Necessary Always Enabled
Necessary cookies are absolutely essential for the website to function properly. These cookies ensure basic functionalities and security features of the website, anonymously.
Functional
Functional cookies help to perform certain functionalities like sharing the content of the website on social media platforms, collect feedbacks, and other third-party features.
Performance
Performance cookies are used to understand and analyze the key performance indexes of the website which helps in delivering a better user experience for the visitors.
Analytics
Analytical cookies are used to understand how visitors interact with the website. These cookies help provide information on metrics the number of visitors, bounce rate, traffic source, etc.
Advertisement
Advertisement cookies are used to provide visitors with relevant ads and marketing campaigns. These cookies track visitors across websites and collect information to provide customized ads.
Others
Other uncategorized cookies are those that are being analyzed and have not been classified into a category as yet.
SAVE & ACCEPT